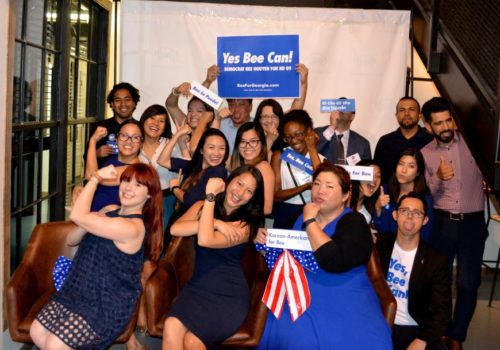 Last Tuesday, the RMN Agency was proud to to host the kickoff event for Bee Nguyen, candidate for the Georgia General Assembly. Bee has the distinction of potentially being the first Vietnamese American to serve on the Georgia General Assembly. Surrounded by new and old friends, family, supporters (including attorneys, judges, elected officials, and other community leaders), everyone was inspired by the journey of a talented individual who chose to forego the security of a traditional job in order to dedicate her full time to advocate for youth and all Georgia families.

“I will work tirelessly because health insurance, livable wages, and quality education should not be bargaining chips for any person,” Bee stated, “I believe every voice matters and will fight for underrepresented Georgians at our Capitol.”

Naturally, Bee is passionate about improving services for education and family violence in order for us to pass on a better world to the next generation. Bee strives to build a vibrant middle class and advocate for livable wages, state funding for MARTA, health care access, and affordable childcare options to improve Georgia’s ranks for overall economic well-being.

Bee’s experience working against discriminatory legislation, gerrymandering, and voter suppression has also put social justice and equality on her plate of issues, and she aims to build stronger bridges between our diverse communities and work to fortify a resilient and inclusive community. You can learn more about Bee as a candidate on her page here.

A daughter to immigrant parents who fled Vietnam, Bee Nguyen watched her father work two minimum wage jobs (making a little more than $3 an hour) while her mother, who had limited English proficiency and resources, raised five girls in an unfamiliar country. From the start, Bee’s parents emphasized the value of education and economic independence. Though she did not follow more traditional career paths encouraged by her family, she discovered within her a talent for entrepreneurship, empowerment, and justice. This led her to work with many organizations such as Boat People SOS, the Federal Emergency Management Agency, and the Georgia Budget and Policy Institute.

In 2009, she founded and served as the Executive Director of Athena’s Warehouse, a nonprofit dedicated to educating and empowering under served teen girls in Atlanta. Athena’s Warehouse provides a safe space for girls to explore important topics and amplify their voices by working on projects like creating films on community issues, using art as a form of healing, and awarding scholarships for college or continuing education.

She graduated from the Andrew Young School of Policy Studies with a Master of Public Administration in 2012, and also served as a member of the Atlanta Regional Board Millennial Committee, a mentor for the Wren & Nest, and a 2015 Georgia Women Policy Institute program fellow.

You can support Bee’s candidacy by making a secure donation or volunteering.