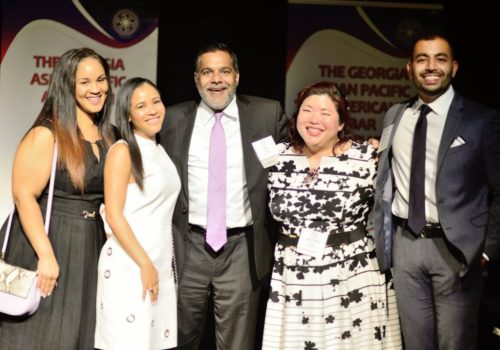 The RMN Agency Forges Ahead with GAPABA

On Thursday, May 25, the RMN Agency was a proud sponsor of the Georgia Asian Pacific American Bar Association’s (GAPABA) fourth annual gala at the Fernbank Museum of Natural History.

Over thirty general counsel, judges, elected officials, and attorneys from across the country were among the 400 that were in attendance.

GAPABA was founded in 1993 with 13 original charter members, and has grown today to nearly 400. With a board, charitable arm, and eight committees, they organize programs to broaden professional opportunities for Asian Pacific American lawyers, other members of the legal profession, and law students. GAPABA encourages and promotes the entrance, advancement, and professional growth of Asian Pacific American lawyers and other members of the legal profession,

“We are humbled by the incredible success of this year’s Gala, owed completely to the participation of prominent leaders in the legal community, the generosity of our sponsors, and the steadfast support of our membership,” said Georgia Court of Appeals Judge Carla Wong McMillian, GAPABA’S President.

Emceed by WABE reporter Elly Yu, the program began with GAPABA’s version of “Between Two Bamboo” with Ivan Fong, Senior Vice President, Legal Affairs and General Counsel of 3M Company, who spoke about his career path and provided advice to young lawyers starting in the profession.

GAPABA awarded the Judge Alvin T. Wong Pioneer Award, named after its co-founder, to Lisa E. Chang, Enforcement Director for the U.S. Dept. of Education Office for Civil Rights, and former County Attorney and Chief Legal Officer for DeKalb County. Ms. Chang is also a past President of both GAPABA and NAPABA. Linda Klein, President of the American Bar Association, and one of the charter members of GAPABA, received GAPABA’s inaugural Women’s Leadership Award. Other awardees included Audrey Boone Tillman, Executive Vice President and General Counsel of AFLAC, who was honored as General Counsel Diversity Champion and the Hon. Parag Y. Shah, City of Atlanta Municipal Court Judge pro hac, who received the Rising Star Award.

A portion of the funds raised will go to benefit the GAPABA Law Foundation. The Foundation announced at the gala that it has named a fellowship to be awarded to a new lawyer engaged in promoting and protecting the legal rights of Asian Pacific Americans in the State of Georgia in honor of Trinh Huynh, a longtime GAPABA member who tragically was killed earlier this year.

The Trinh Huynh Fellowship Fund was established in partnership with Asian Americans Advancing Justice Atlanta, to commemorate the legacy of one of GAPABA’s most ardent community activists and former board members. Trinh’s mother Van Lam, her sisters Dao Huynh and Chi Huynh Kindland, and her aunt Lien Huynh were all present at the 2017 GAPABA Gala. The audience delivered a standing ovation upon the announcement of the inaugural fellowship. GAPABA member Lily Patel sung delivered a moving a cappella solo rendition of  You’ll Never Walk Alone.