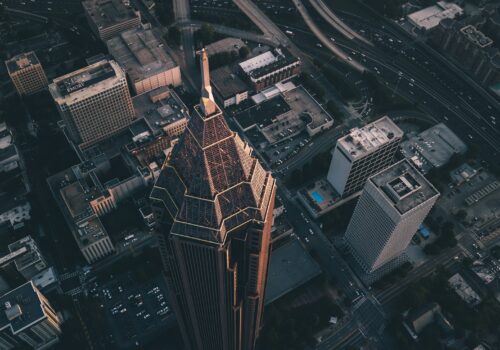 Why Lawyers Should Relocate to Atlanta

Photo by Stephen Cook on Unsplash

This blog post was originally published on August 6, 2018 and has been updated.

Atlanta may not be the most obvious destination for attorneys looking to first establish their legal careers. Many new law grads and aspiring attorneys imagine themselves first cutting their teeth in the huge markets of New York, LA or DC — entertaining dreams of managing corporate work for Manhattan giants, being close to policymakers at our nation’s capital, or negotiating contracts for Hollywood glitterati or movie studios. These are the types of lawyers glorified in TV and media, like in the series Suits or House of Cards.

The allure of the Capitol, LA Law or Wall Street tends to overshadow the Empire State South. However, the shine can soon wear off when it is soberly tempered by reality. The pressure cooker of billable hours, astronomical cost of living, and cut-throat competition in these markets leads quickly to burnout. When lawyers start dreaming of a better work/life balance, an affordable metropolitan area to raise a family, and owning a large home without breaking the bank, Atlanta has emerged as a very attractive choice.

Why Atlanta? Let’s count the reasons why lawyers should seriously consider relocating here:

Atlanta has one of the fastest growing legal markets.

Atlanta’s largest law firms have been aggressively expanding nationally and globally to remain competitive, creating a healthy legal market. Five Atlanta-based firms are counted in the AmLaw 100 — the highest-grossing law firms. These include King & Spalding, Alston & Bird, Troutman Pepper (a merger created in 2020 by legacy firms Troutman Sanders and Pepper Hamilton), intellectual property powerhouse Kilpatrick Townsend and labor & employment specialists Ogletree Deakins. There are 25 AmLaw 100 firms with offices in Atlanta that increased their revenue in 2020 by 4.3% —  several of which outperformed the national average.

Atlanta lawyer compensation is very competitive to salaries in other metropolitan markets. Atlanta ranks #12 for average compensation in the top 30 list of BigLaw legal markets:

You can be admitted to practice in Georgia on Motion.

Georgia provides bar reciprocity, meaning an out-of-state attorney may be admitted to practice in Georgia without having to take the bar exam. So long as you have a J.D. from an ABA-approved law school, are a licensed attorney in good standing, have never taken and failed the Georgia bar, have never been subjected to professional discipline, and have never been denied certification of fitness to practice, you may apply to be admitted on motion. You must have also practiced for at least five years prior to filing your application, and have received Certification of Fitness to Practice in Georgia.

States vary on bar reciprocity. Be sure to check with your state to ensure comity.

Georgia has invested significantly to ensure that Atlanta continues to be a leading business hub, creating a lot of career opportunities. The city boasts a young, diverse workforce, and companies move here to find the employees they need. Atlanta currently has a 4.9% unemployment rate and is projected to add 1.5 million jobs by 2040. Over 200,000 people—mostly young professionals pursuing to elevate their careers—moved to Atlanta in 2019 alone.

Atlanta also boasts the third largest concentration of Fortune 500 companies in America. Of the 18 Fortune 500 companies headquartered in Georgia, 16 can be found in metro Atlanta, including The Coca-Cola Company, Delta Air Lines, The Home Depot, UPS, Newell Brands and Mercedes-Benz USA. Recently, tech companies have been flocking to Atlanta to establish hubs, including Amazon, Facebook and Microsoft. Professionals are being drawn to Atlanta to join major industries in banking and finance, healthcare, auto manufacturing, media and communications, film and television, and logistics.

In Atlanta, the living is easy.

Atlanta boasts a very reasonable cost of living, particularly in comparison to other major cities like LA and NYC. Housing prices in Atlanta are 125% less expensive than NYC and 51.9% less than LA. Looking for large lots or new high-rise living? Atlanta’s residential housing market is amazing. Renting is also popular, with apartments averaging $1,500/month. Affordable housing costs coupled with the promise of career growth has people flocking to the metro area by the thousands.

And how about that Atlanta lifestyle?  Pandemic notwithstanding, the city is justly famous for its nightlife and bustling bar scene, the music and entertainment industry, dance clubs, and international foodie restaurants. The Atlanta Beltline, a popular attraction among singles and families alike, is home to more than just trails and walkways. The Beltline features great food, shopping at Ponce City Market, and access to multiple parks and the Museum of Contemporary Art. The city is also famous for its sports teams: Atlanta United FC (Soccer) the Braves (baseball), the Falcons (football), and the Hawks (basketball). The Atlanta Tennis Open competition is also hosted here every summer.

In addition to its Southern charm, Atlanta is a mecca for civil rights and social justice– it is the birthplace of Martin Luther King, Jr. and is home to the National Center for Civil and Human Rights.  It also attracts people from myriad cultural backgrounds. In addition to English, 70 languages are estimated to be spoken here, including Spanish, Korean, French, Gujarati, Mandarin, and Vietnamese. It also has the third highest LGBTQ+ population in the United States, behind only San Francisco and Seattle, and is known as the Gay Capitol of the South.

You get more bang for your buck in Atlanta.

The National Association for Law Placement (NALP) has produced an annual Buying Power Index (BPI) an extremely useful chart comparing cities to assist lawyers in determining which location offers the best combination of discretionary income and lifestyle options. Gathering data from 90 cities in 2018 and using New York as its base of comparison, Atlanta was ranked #3 in having the most favorable buying power.

In 2018, an Atlanta salary of $160,000 would purchase more than twice as much as a $190,000 salary in New York.  Imagine what you could do with all that extra disposable income? You would definitely have many more lifestyle options — money to spend on say, raising a family, buying real estate, or traveling.

Warm weather and a great atmosphere to raise a family.

Atlanta’s weather is generally pleasant and temperate throughout the year, with greater greenspace and tree canopy coverage than the national average. Metro Atlanta counties have hundreds of parks, trails and nature preserves. The weather makes it easy to enjoy the outdoors almost any day of the year.

The city and its suburbs are a great place to raise a family. Between restaurants, shopping districts, nature trails and historic sites, it’s impossible to run out of things to do. For kids, the area offers the largest Aquarium in the United States, a Zoo with famed pandas and gorillas, botanical gardens, concert halls, national parks and endless attractions.

Additionally, the educational options for private and public schools are also excellent. With over 400 pre-schools, more than 100 elementary schools, and almost 100 middle schools in the Atlanta area, there are plenty of great options to choose from. Atlanta is also home to nationally ranked high schools and universities. The Gwinnett School of Mathematics, Science, and Technology; and the Davidson Magnet School are both ranked in the top 100 high schools across the country, with the Gwinnett School coming in at #12. Additionally, Emory University, Georgia Tech, and the University of Georgia all rank within the top 50 universities in the U.S.

Okay, so Atlanta traffic is undisputedly snarled because of urban sprawl. Much of Atlanta is very spread out and intersected by I-85 & I-75 (North/South), circled by our perimeter I-285, and I-20 (East/West). On the whole, the city is not very walkable (with an exception of a few neighborhoods and area such as downtown Atlanta, Midtown, Buckhead). Most people own cars and rely on the interstate system, which jams easily from all the traffic, which requires residents to account for additional commute time because of this.

That being said, the world’s most prosperous cities all have bad traffic: Los Angeles, NYC, Beijing, London, etc. The increased traffic flow is a sign of growth. The city has also been investing in public transportation and urbanization projects that should improve the flow of traffic in the coming years.

One of these projects is the Atlanta Beltline, which has been dubbed one of the largest urbanization projects in the nation. The Beltline is a former railway corridor around the core of Atlanta that will be developed into a multi-use trail projected to increase walking, jogging, and bike paths throughout the entire city.

The city is connected by a network of trains and buses (MARTA), and a trip only costs $2.50. Most residents rely on a car, and can keep their state license if they are relocating. Foreign drivers’ licenses are valid for up to 12 months. Car sharing such options such as Zipcar, Uber, and Lyft are also popular.

Air travel is easy and better than most cities because Atlanta’s Hartsfield–Jackson Airport is the world’s busiest airport by passenger numbers. The airport’s SkyTrain runs 24 hours a day, with trains arriving every 3 minutes, ensuring that the many travelers at the airport arrive to their gates on time.

Along with convenient travel, Hartsfield-Jackson also provides affordable travel. A one-way flight from Atlanta to NYC in 2021 can be as inexpensive as $53; to Los Angeles for $80; to Vancouver for $180; to London for $325; or to Hong Kong for $575.

With so many great reasons to relocate to Atlanta, the possibilities are endless. Convenient and affordable travel options make relocating easier than ever, and an our legal recruiting firm can help streamline the process.